"It's been said before but those were the best ten days of my entire life." With this final conclusion, one of the participants summed up this year’s "Young Adults Exchange”, which took place from July 8 to July 17 under the auspices of "Operation Friendship International". After the first Exchange 2013 in the Netherlands, this time, three years later, Manuel Würth and Felix Steiner had invited "Young Adults" from all member countries to Bavaria.

For ten days, nine young adults from five different countries were visiting the Upper Palatinate. This time, there were three participants from the U.S., three from the Netherlands as well as one participant from each, Wales, Hungary and the Ukraine. Similar to the regular youth exchange of “Operation Friendship Bayern e.V.”, the guests where hosted by different host families.

Würth and Steiner where in charge of organizing the program. Besides regional activities, the program included various day trips, such as a visit of the castles Neuschwanstein and Linderhof as well as of the cities Munich, Bamberg and Prague.

The best part, both guests and organizers agreed on, was the multicultural character of the group composed of various nations. “It didn’t matter where we were, everybody was confused that we as a group would talk in five different languages but at the end of the day, we would all laugh together. “, one participant from the Netherlands said.

After ten exhausting days, Steiner and Würth have one common goal: They want to establish the Young Adult exchange as an integral part of Operation Friendship International. For the next year, they are already working on setting up a similar program for young adults. Hopefully, in 2017, the destination will be called: Sweden! 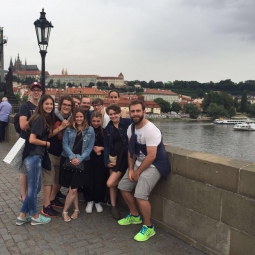