Young people bring back home memories of harvesting tomatoes for needy people, meeting Americans and French, and also photos of Times Square and the Statue of Liberty. After the trip the insolvency of Air Berlin bothers the board of Operation Friendship Bavaria (OF).

There were streams of tears when ten young people from the county of Neustadt and Weiden were saying goodbye to their American hosts at the Airport in Boston. Together with their advisor Max Kaes they were on a three weeks international exchange program in Grafton in Massachussetts.

OF Bavaria had booked a group ticket for this flight through a travel agency and was supposed to get back the deposit – a four figure amount - by Air Berlin. But this didn’t happen and it seemed that the money “crashed” because of the bankruptcy of the airline. At the weekend the chairman of Operationd Friendship Bavaria, Gerhard Steiner,  could give the all clear signal: ”The money has been transferred”. Otherwise the organisation – which is dependent on financial support,  would have had the problem the refinance this loss.

The guests were staying with American host families. And because some of their children have been in Neustadt last year, they were very happy to meet their friends again. This time also an OF group from France joined the program. They went to Boston, the state capitol. At a chocolate factory they could create their own bar and at the PEZ visitor centre they all got a dispenser.

They joined the community harvest project and picked tomatoes for needy people and helped weeding a potato field. But the highlights were the two days in New York. The young people were impressed by the skyline of Manhattan and the Statue of Liberty on their boat trip on the Staten Island Ferry. Then they visited the 9/11 memorial, the Rockefeller Centre and St. Patrick’s Cathedral. They were fascinated by the sea of lights of Times Square and also by Central Park including the zoo and the Metropolitan Art Museum.

They also enjoyed the amusement park Six Flags, and they needed endurance for their hike through Purgatory Chasm, which was formed by melting glaciers. They also went to the beach and were kajaking and canoeing, bowling and shopping. The Regional Day was something special. There the groups from Grafton met the OF group Palmer with their guests from Wales and Crimea.

Sixteen year old Elisa Bäumler from Weiden is raving: “You see a lot of places, but you also spend a lot of time together. Something totally different to the normal familiy vacation”. Because she was staying together with a young French girl in her host family, she also could refresh her French language. Sixteen year old Marie Eckert from Schirmitz is also overwhelmed. “It’s very interesting to meet so many different people at the same time and also experiencing a great program, like going to New York and Boston”.

Fourteen year old Abi from Grafton, her family hosted a German and a French youth, stated:” It’s fantastic to have the opportunity meeting so many different people”. She was talking of an unbelievable experience, which can’t be compared with any other normal trip. For her the little differences were very interesting. So she found out that the Europeans don’t let the water running all the time while taking a shower. “It’s cool that you can say you have friends in a foreign country”, said Kelsey, a fifteen year old girl from Grafton.

Tony Mansfield was delighted: “Awesome. This was one of my best experiences I have had in my life. I’m very proud that could offer my children such an experience”. He was a host father and also a chaperone.  Host mother Kristen Sidman had taken part as a teenager in the OF exchange program 35 years ago. Her opinion: “Living with a host family offers the unique insight in the culture of the hosting country. You can’t compare this with anything else.”  Next summer the Americans will stay with host families in the county of Neustadt. Some of they young Americans want to use this opportunity to meet their German friends again.

New host families are welcome to sign up for it. If you have any question, feel free to contact us! 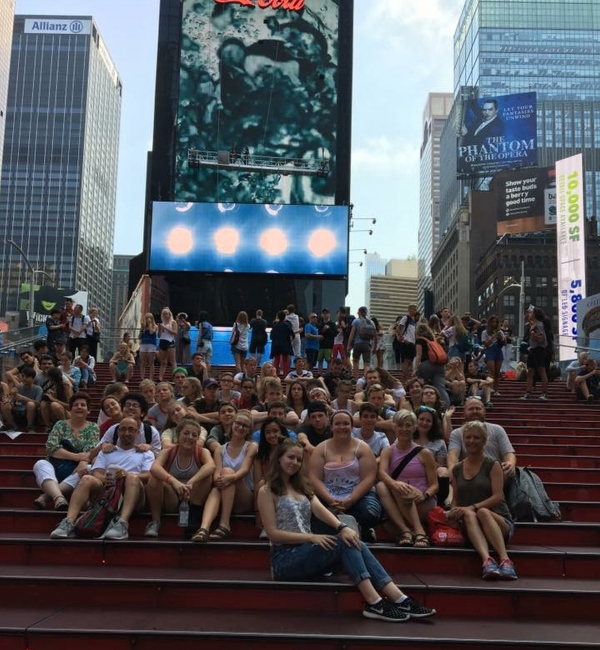 The young people spent two days in New York together with their hosts and the youngsters from Paris. They were especially impressed by Times Square. 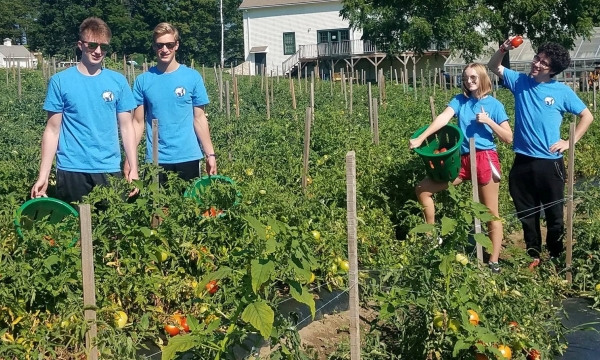 The guests in the USA visited a lot of places and had a lot of fun. They also joined the Community Harvest Project- they picked tomatoes. 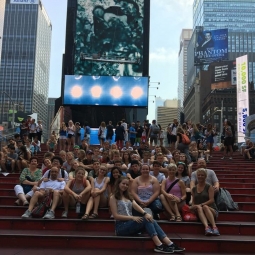